Natural infection vs vaccination: Which gives more protection?
Nearly 40% of new COVID patients were vaccinated - compared to just 1% who had been infected previously.
2021.7.13【israel National News】
Coronavirus patients who recovered from the virus were far less likely to become infected during the latest wave of the pandemic than people who were vaccinated against COVID, according to numbers presented to the Israeli Health Ministry. Health Ministry data on the wave of COVID outbreaks which began this May show that Israelis with immunity from natural infection were far less likely to become infected again in comparison to Israelis who only had immunity via vaccination.
More than 7,700 new cases of the virus have been detected during the most recent wave starting in May, but just 72 of the confirmed cases were reported in people who were known to have been infected previously – that is, less than 1% of the new cases. Roughly 40% of new cases – or more than 3,000 patients – involved people who had been infected despite being vaccinated.
With a total of 835,792 Israelis known to have recovered from the virus, the 72 instances of reinfection amount to 0.0086% of people who were already infected with COVID. By contrast, Israelis who were vaccinated were 6.72 times more likely to get infected after the shot than after natural infection, with over 3,000 of the 5,193,499, or 0.0578%, of Israelis who were vaccinated getting infected in the latest wave.
According to a report by Channel 13, the disparity has confounded – and divided – Health Ministry experts, with some saying the data proves the higher level of immunity provided by natural infection versus vaccination, while others remained unconvinced.

COVID-19 Evidence-Based Clinical Response Panel
@cov19treatments
Pfizer vaccine now completely worthless in Israel as >80% of all COVID-19 patients were previously vaccinated. Was it really worth it all the hardship, suffering, and death? Cases at low baseline but its clear vax is bust. Data from Israel Ministry of Health Dashboard. 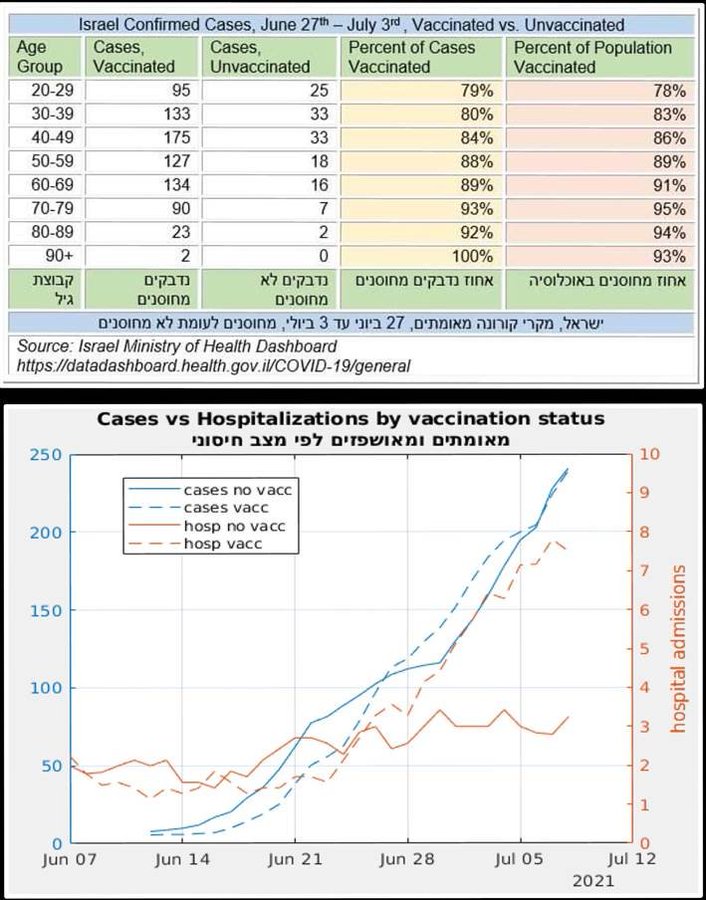